Today is Matinee Saturday. Y'all can share movie reviews of films from the 30s. Or, share your favorite Actors/Actresses, fun movie trivia, etc.... 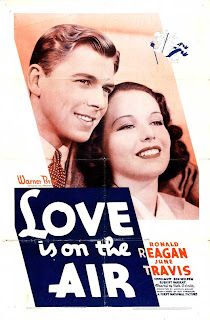 I'll share with y'all a short movie review of Ronald Reagan's first feature film: Love Is On The Air {1937}.


Last fall TCM was showing a couple of Ronnie's films so I decided to tape some of them. Mostly because Reagan is one of my favorite actors. One of those films that I taped was, Love Is On The Air {1937}. The story of a top crime reporter for a radio station, who digs his nose into things his sponsor doesn't want him digging up- information about some gangsters {because he, himself is in league with them}.


The station gets in trouble and they have to give Reagan a new radio program. So they give him the children's program. But he still finds a way to solve the murder case on the kiddie show.


I loved this movie! It was also neat that Warner Brothers had Reagan's first film be about a radio broadcaster. As that was his job before coming to Hollywood to star in pictures.

Source: imdb.com via Ashley on Pinterest
Ronald Reagan in 1932