I know y'all are dying for pictures of our trip to Texas last month. Right? Well, I have a lot to share & tell that it will have to be shown in two posts. Are you ready for a short virtual trip to San Antonio? Let's go! 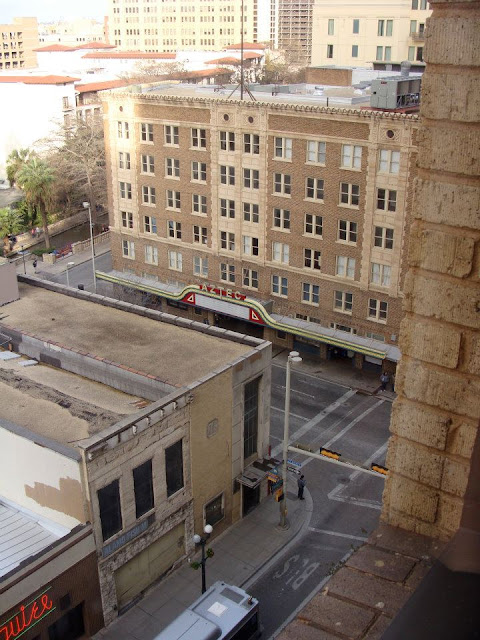 The view out of our hotel room....

View from the 22nd floor on the hotel guest patio...

Gabrielle & Hanne-col at the CFA studying their notes from the classes...

Mr. Justin Tolley - Director & Producer {He worked on Fireproof, Letters to God, The Grace Card, Courageous, October Baby. And before he worked on Christian film he was working on the set of Lost.}

Stephen Kendrick & Erin Bethea (Catherine Holt in Fireproof) {she was a surprise guest!}

A wonderful plaza that reminded me of the village in the movie, The Guns of Navarone {1961}.

Mr. Tryg Jacobson - Founder of Jake's Cake {He talked about Branding Your Company/Film/Yourself.}

Anna Botkin {We had the chance to talked to her for about 20 minutes about an idea we had! It was wonderful!}

The Academy was a blast! Me and my sisters were able to meet up with Mrs. Morecraft {we took her online writing class & Gabrielle and I are FB friends with her}. She is such a sweet & wonderful lady - with a beautiful voice that we all love! We also met Mr. John Fornof, Anna & Elizabeth Botkin, Esther Leclerc, Andrea Reins, Atlanta, and several other girls....

At the Academy we learned so much! We learned about theology, the history of Hollywood, Cecil B DeMille, branding, post-production, story writing, Alfred Hitchcock {Isaac Botkin had some great insight on some of his films}, a bit about TV Shows, and so much more!