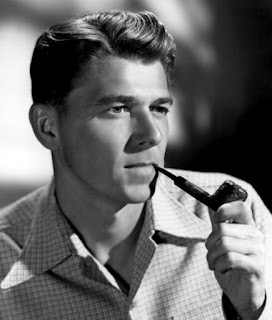 For a while now I've been wanting to do a series on old Hollywood actors & actresses where I share the movies I've seen of theirs. I finally took the plunge & named the series, Actors/Actresses & Their Movies -- now the series will only cover the films that I've seen, and nothing else about the person. Sound good?

To start off the series I decided to go with one of my very favorite actors, Ronald Reagan. Most people possibly only know of his roles in the following films: Knute Rockne: All American [1940], Kings Row [1942], Santa Fe Trail [1940], and Bedtime for Bonzo [1951] -- which are some of his most famous roles. I'm going to share with y'all the films that I've seen of his & loved, and I haven't disliked one - yet.  *grin*

Also, if the movie is available for sale on DVD, the movie title will be clickable. 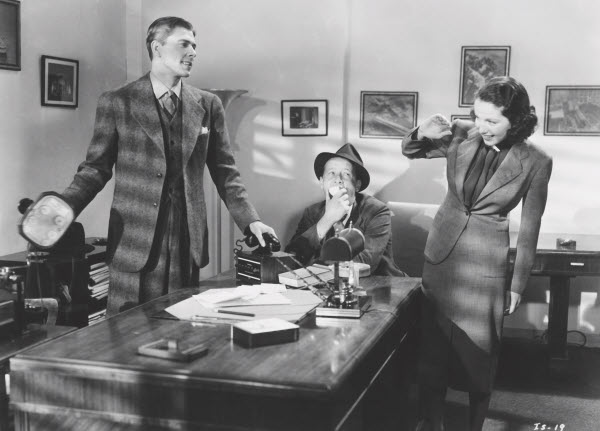 This was Ronnie's film debut, and for his first role he played a familiar one, a radio crime reporter. Well, he wasn't a radio crime reporter before Hollywood, but a radio sports broadcaster [still it was with radio]. Anyhow, it is the story of a top crime radio reporter who digs his nose into things his sponsor doesn't want him digging up -- information about some gangsters that are in town [because he, the sponsor himself, is in league with them]. The station gets in trouble and they have to give Reagan a new radio program. So they give him the children's program. But he still finds a way to solve the murder case while working on the kiddie show. 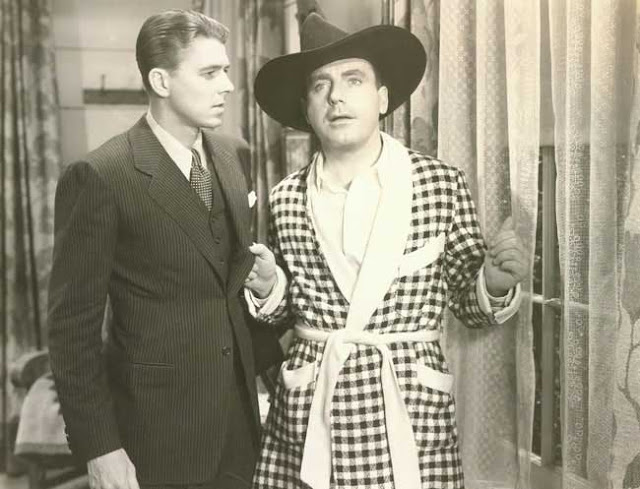 Brooklyn crooner Elly Jordan (Dick Powell) and his bandmates end up broke at a Wyoming dude ranch run by Jane Hardy (Priscilla Lane). Singing for his supper there, Elly is heard by Broadway booker Roy Chadwick (Pat O'Brien), who mistakes him for a genuine cowboy and decides to make him a star. The fact that Elly is terrified of animals (including horses) and doesn't know the first thing about the West makes his big break tough to pull off. 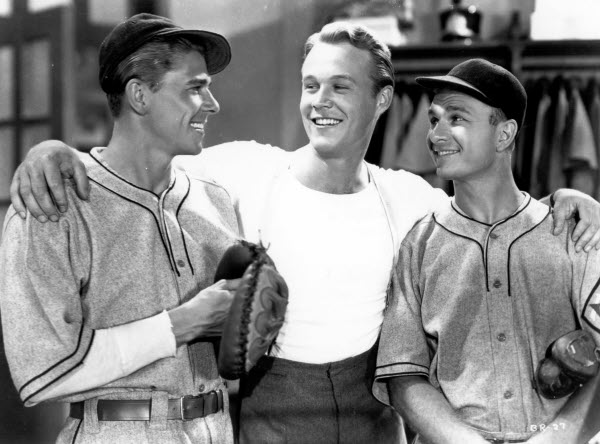 The story of three Virginia Military Institute cadets who get in a bunch of scrapes, mostly because of Billy who is always talking the other two cadets into doing things. One of cadets, 'Bing' Edwards, is secretly married and his wife is expecting a baby -- which causes some trouble for him to keep the secret that he is indeed married. 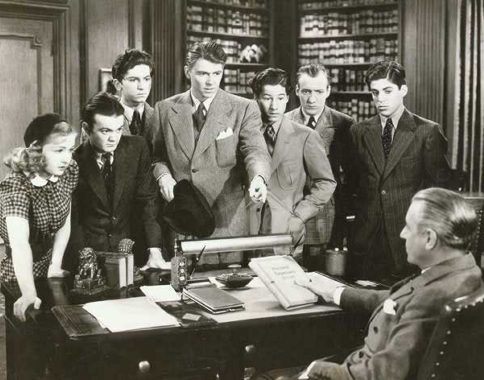 A young man (Frankie Thomas), just released from a reformatory, moves to a new neighborhood with his sister (Ann Sheridan), intending to start a new life. However, he gets mixed up with the local mob boss and corrupt politicians and soon finds himself being framed for an arson and murder he didn't commit. 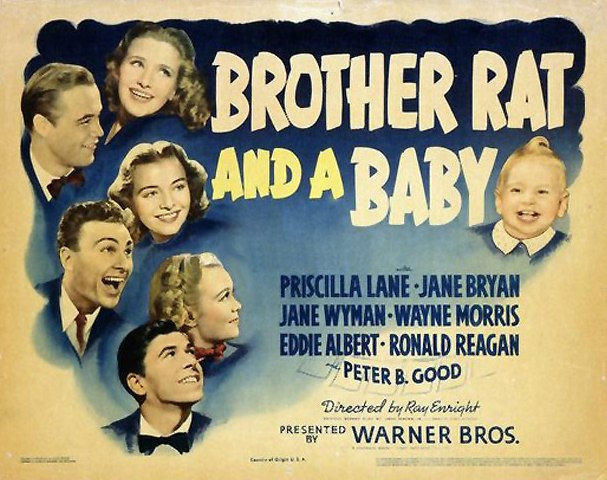 The sequel to Brother Rat, this film follows the cadets after they have graduated from VMI and their adventures in New York City, and of course, the baby (who kinda steals the show). 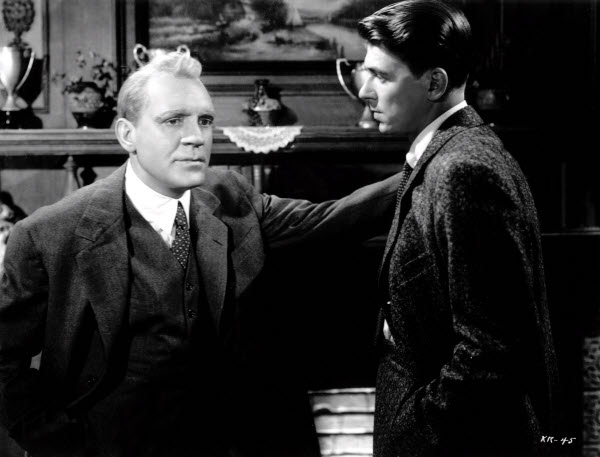 Lars Rockne and his family, including his four year old son Knute, emigrate to Chicago in 1892 from their native Norway. By his his mid-twenties Knute (Pat O'Brien) saves enough to attend Notre Dame University, where he excels in football and chemistry. He and a teammate develop the forward pass as an offensive weapon while working as life guards on summer break and use it to upset heavily favored Army in a historic game. After graduation, Rockne becomes a teacher while coaching part time, but ultimately abandons academics to devote all his energies to football. During his tenure as head coach at the school, he develops such outstanding players as George Gipp (Ronald Reagan), who dies prematurely from a strep infection, and the Four Horsemen while introducing many innovative tactics including the backfield shift.

Two cadets, Stuart and Custer, have graduated from West Point in the 1850s and are sent to Kansas to help out with the uprising that John Brown's followers have started. If y'all want to be technical, this seriously isn't the most accurate movie [considering George Custer didn't even start West Point until June, 1857], but Jeb Stuart was really a part of the Bleeding Kansas and capture of John Brown [so that part is true]. 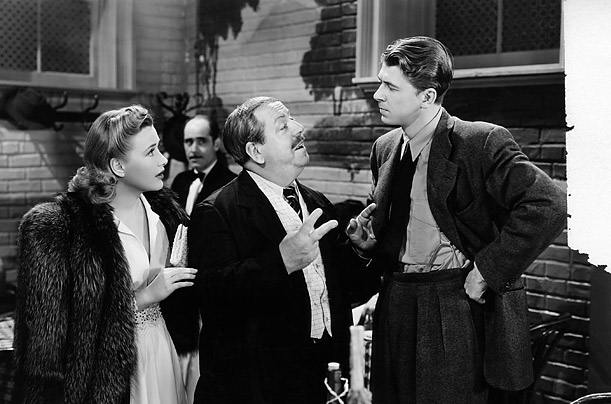 Pamela (Priscilla Lane) is just your average working class girl trying to make ends meet and maintain a positive outlook on life. Happy as a clam living in a boarding house across the hall from her boyfriend Pete (Ronald Reagan), Pamela hasn't a care in the world other than meeting her rent. As it happens, Pamela meets an older lady who is moving in to the boarding house. Pamela takes the lady under her merry wing and treats her to a dinner at the Italian joint where Pete plays piano. Over the course of the next few days, the lady (who is rather well to do) hires an attorney to give Pamela a million dollars. The result of which causes Pamela and Pete's lives to be turned upside down until they finally focus on what is important. 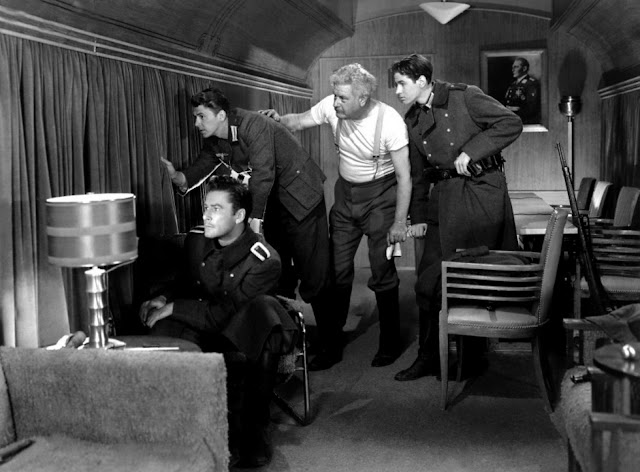 When Flight Lt. Forbes (Flynn) and his crew are shot down after bombing their target, they are captured by the Nazis and discover valuable information about a hidden German aircraft factory that they must take back to England. They cleverly escape from the Nazis and are on a race to get across Germany without getting recaptured while causing as much damage as possible. They eventually become the "Three Man invasion" as one man after the other gives up his life. When the Nazis are about to recapture them they find a brilliant way to escape. 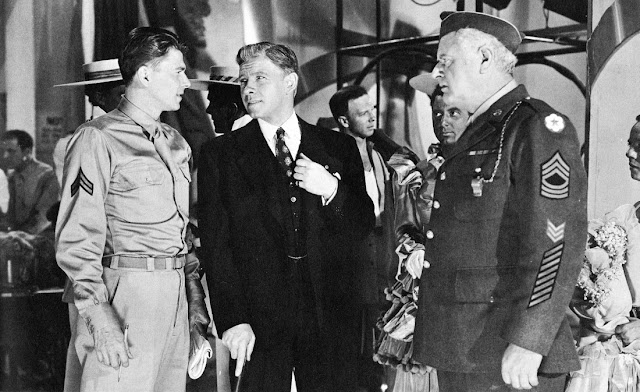 An Army musical that features a father and son duo [played by: George Murphy & Ronald Reagan] who put on a show for the morale during their respective wars[World War I & II], before heading off to war themselves.

I honestly don't remember the storyline of this film. I remember there being a bit of a love triangle, anthrax, and lots of horses and cows. 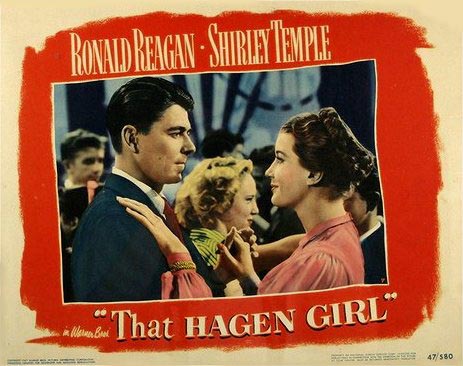 Mary Hagen [Shirley Temple] is considered by the town gossips to be the illegitimate daughter of Tom Bates [Ronald Reagan], a former resident and lawyer. When Tom moves back into town, talk grows louder and Mary and Tom become good friends. It is later revealed that Mary was adopted at the time that Tom had left town, leading to part of the rumors. 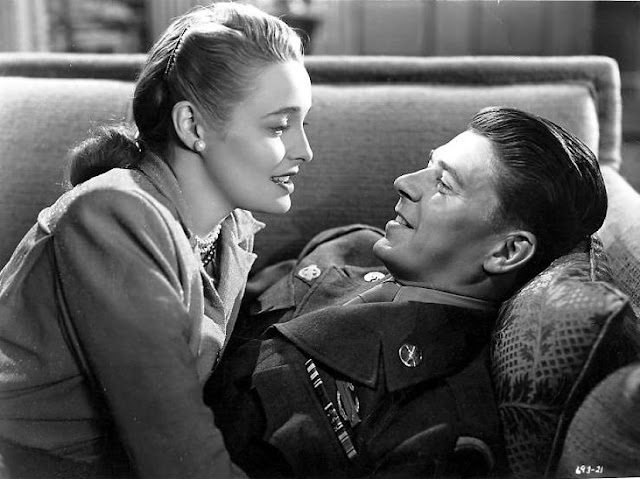 John is a returning GI. Mary is the girl he left behind. One problem, he married Lilly so she could come to the States to marry John's best friend, Fred 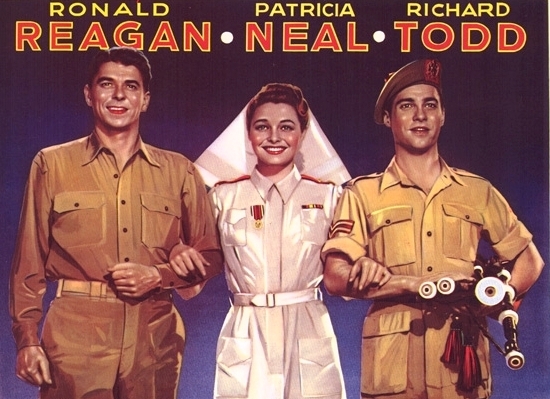 Goodness. This film is a tearjerker. Set in Burma during the Pacifica War in 1945, a group of wounded Allied troops have set up a makeshift British military hospital in the jungle. The men are told that soon they will be receiving a new patient, a Scot, who has survived his operation but will be dying soon from a failed kidney. The group try to become friends with him, but he is gruff and suspicious of his bunkmates intentions. 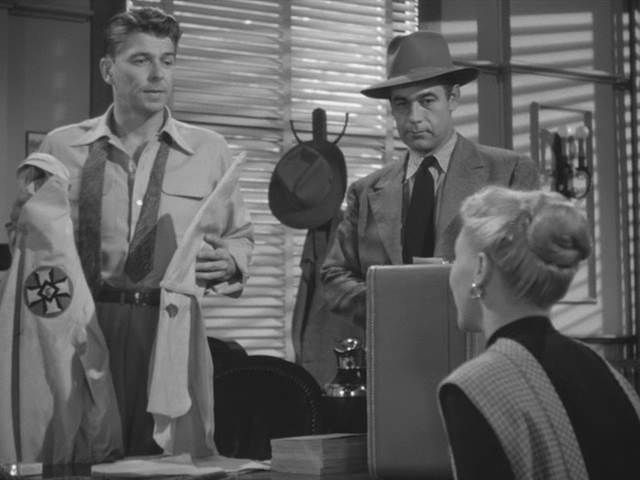 Marsha Mitchell [Ginger Rogers] is a traveling dress model, who decides to visit her sister, Lucy [Doris Day] and her husband, after not seeing her sister for two years, for a short day trip. At first arrival she becomes a witness to a KKK murder of an out-of-town reporter. When she arrives at her sister's home she shockingly discovers that her brother-in-law was one of the KKK members, her sister completely unaware of her husband's actions. The film showcases how the small town deals, or not deals, with the KKK murders. 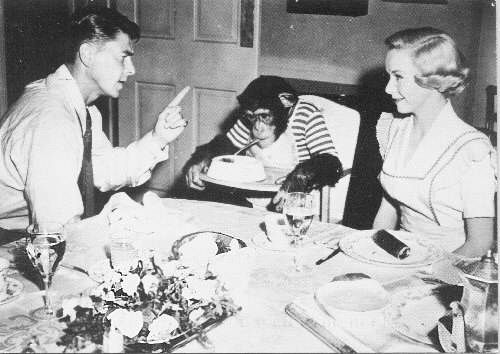 Psychology professor Peter Boyd (Ronald Reagan) is trying to teach human morals to a chimpanzee. He hires a woman, Jane (Diana Lynn), to pose as the chimp's mother while he plays father to it while using 1950s child-rising techniques. Hilarity ensues. 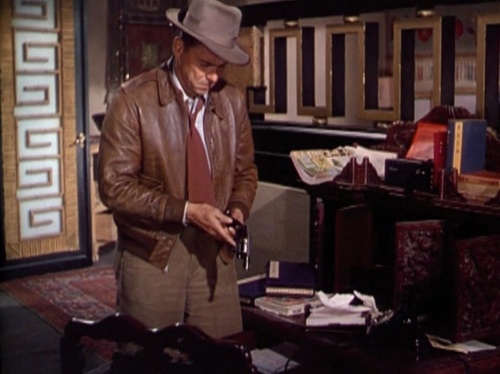 Post-World War II China. Jeff Williams [Ronald Reagan] helps a little orphan boy who has a valuable gold statue stay alive. Jeff struggles with human greed to keep and sell the statue for himself, but in the end does the right thing. It is a charming story, though it could have used some help in the editing department [mostly with sound effects and music].

I love a good baseball themed movie. Scratch that. I enjoy a good sports film. The Winning Team tells the story of baseball pitcher, Grover Cleveland Alexander [Ronald Reagan] and how his struggle with alcoholism and bad health pushed him out of baseball. His wife, Aimee [Doris Day], helps him get a second chance to come back to baseball. 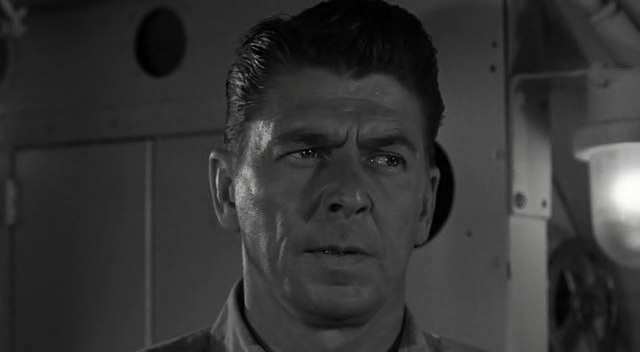 Hellcats of the Navy is the only film that Ronald Reagan and his wife, Nancy Davis, appeared in together. The film is about Commander Casey Abbott [Reagan] who is the commander of a fictional submarine that is ordered to undertake a dangerous mission of cutting off the supply route between China and Japan in the heavily mined waters of the Asiatic mainland. Tension is high when Abbott must try to keep his personal feelings separate from his professional decisions.

Wow! I didn't realize that I had seen so many of Ronnie's movies -- in fact, I've seen almost all of his films. Well, for other actors & actresses that I've seen over 10 of their movies or so I'll split up their posts by decade, or something close. Otherwise, some of these posts will be very long.