Hello everyone! I thought it would be fun to kick off this week with a fun little movie game that we used to do on Bramblewood Fashion a couple of years ago. Old time readers may remember this game.

How the game works: I will be sharing pictures and quotes from different Old Hollywood films [pre-1970s]. You will leave a comment guessing where each one is from. Sometime between this coming Saturday - Monday I'll share who guessed correctly each quote and movie screen-cap and tell the names of any movies no one guesses. Do try not to use Google, TCM, or IMDB when guessing.

Ready for the game to start? On your marks. Get set. Go. Start guessing!

1. Character One: A girl can't read that sort of thing without her lipstick.

4. Character One: Well, it was pitch dark and there he was. Tall, blue eyes, slim, quite good-looking... in a brutal, mean way, Papa. A terrible man!

5. Character One: You don't understand: this is *my* car!
Character Two: You mean *this* is your car? *Your* golf ball? *Your* car? Is there anything in the world that doesn't belong to you?
Character One: Yes, thank heaven, YOU! 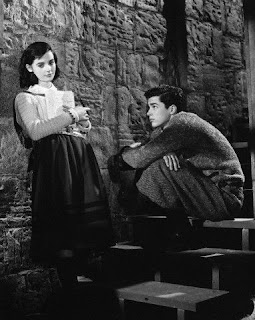 7. Character One: Look I probably should have told you this before but you see... well... insanity runs in my family... It practically gallops.

9. Character One: [after being awakened] How come every time you wake me up I have a date with Ann Sheridan?

11. Character One: [after declining a bet that he cannot say what color his tie is] Polka dots. In the whole world, only Character One could blow a thousand bucks on polka dots. 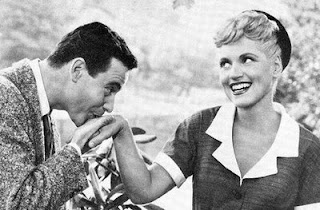 13. Character One: She likes you. She thinks you're stupefying.

14. Character One: The things a girl will do for a mink coat.

15. Character One: At midnight, I'll turn into a pumpkin and drive away in my glass slipper. Character Two: And that will be the end of the fairy tale.

17. Character 1: How do you tell a child that she was born to be hurt?

18. Character 1: Tell me, Honey, how come you're so cute?
Character 2: I had to be if I was going to get such a good-looking fella. 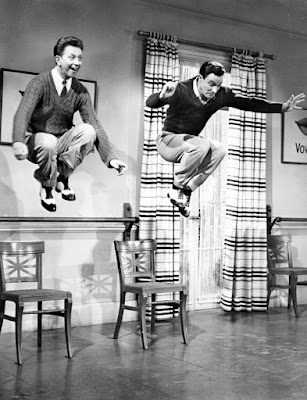 23. Character 1: It's a conspiracy, I tell you. The minute you start they put you on the all-American sucker list. You start out to build a home and wind up in the poorhouse. And if it can happen to me, what about the guys who aren't making $15,000 a year? The ones who want a home of their own. It's a conspiracy, I tell you -- against every boy and girl who were ever in love.

24. Character 1: One day the war will be over. And I hope that the people that use this bridge in years to come will remember how it was built and who built it. Not a gang of slaves, but soldiers, British soldiers, Clipton, even in captivity.