I haven't done one of these posts since, umm... *whispers* January. Which means it is high time that I brought this series back. And guess what? I'm going to be sharing all the Frank Sinatra early films from the 1940s that I've seen. Yay!

Source: google.com.au via Ashley on Pinterest
Higher and Higher {1943} Starring: Frank Sinatra, Barbara Hale // This movie is just adorable. Of course, all of the early Sinatra films are. *smile* It is the story of a rich man who has lost his money and is behind on paying the household staff. You will follow their fun adventure as they scheme to have one of the maids masquerade as a debutante going out to society, so she can marry a rich man & save the household. It also features a [Bing] Crosby & Sinatra joke that was really popular in the 1940s.

Step Lively {1944} Starring: Frank Sinatra, George Murphy // I do believe this was the first 1940s Sinatra film I saw. Hmm...yep, it was. Anyhow, about the movie. George Murphy's character is rehearsing a musical comedy in a penthouse....on credit. The quickly rising bill is driving the manager frantic and he wants to throw the whole acting group out of the hotel, but he wants his money. Frankie's character arrives to the hotel thinking that Murphy wants to buy his dramatic play & let him direct it. Let's just say there is a lot of drama & chaos, and a really sweet ending.


Anchors Aweigh {1945} Starring: Frank Sinatra, Gene Kelly, Kathryn Grayson // This is the first of the three films that Gene Kelly & Frank Sinatra did together, and it is also my number one favorite. Plus, I do tend to sing one of the songs to my sister, Hanne-col when ever I want something from her. Those who have seen the film, can you guess what song it is? I do change some of the words. Anyhow, the movie follow two sailors {Kelly & Sinatra} who are on leave in Los Angles. On their first day of leave they are picked up by the police to help them get some information out of a little boy who wants to join the navy. They take the boy home and expect an old aunt is taking care of the boy. It then follows the romantic journey of them both. Btw, in these 1940s films Sinatra always gets the girl from Brooklyn who is also not a big leading lady {his image was changed after his divorce from Ava Gardner in the 50's. Then he became more of a ladies man who got the leading lady.}. 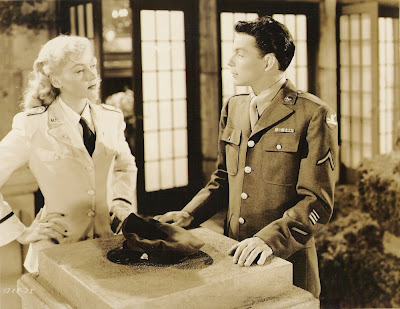 Source: filmnoirphotos.blogspot.com via Ashley on Pinterest
It Happened in Brooklyn {1947} Starring: Frank Sinatra, Jimmy Durante, Peter Lawford, Kathryn Grayson // This is one of very favorite Sinatra films. It has Durante in it, takes place in Brooklyn, we see the Brooklyn Bridge, has a wonderful storyline, and is just too cute! I may, or may not have a 1940s/50s view of Brooklyn. Hey, I still think the Los Angles Dodgers are the Brooklyn Dodgers. *grin*

Take Me Out to the Ball Game {1949} Starring: Frank Sinatra, Gene Kelly, Esther Williams, Betty Garrett, Edward Arnold // This is a fun baseball themed musical/comedy film. It follows the story of a person who inherits a baseball team. The players on the team think the person will know nothing about baseball and will meddle in how the team is run. Boy, are the players in for a surprise. A little side note: this was also the first, and only, Esther Williams film I've ever seen - so far.

On the Town {1949} Starring: Frank Sinatra, Gene Kelly, Betty Garret, Ann Miller // This was the first Sinatra & Kelly film I saw out of the three. It might also be my least favorite of the three, but I do enjoy most of the songs. In fact, they can get stuck in your head for days. But hey, who cares? Not me. Anyhow, the movie is about three sailors who have a one day leave in NYC. They spend the whole day looking for fun and romance before their 24-hour leave is up.

What 1940s Sinatra films have you seen? Which were your favorites?