I decided to do a new series to help me do more movie review posts on the blog. It is just simply called, Movie Reviews - nothing fancy. 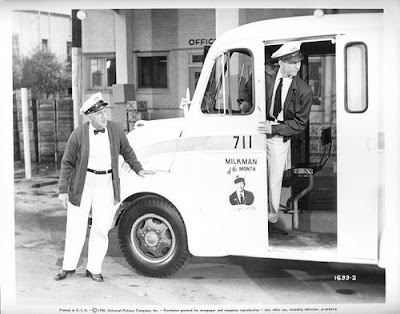 The Milkman {1950} Starring: Donald O'Connor & Jimmy Durante - Roger {Doanld O'Connor} wants to work at his dad's company as a milkman but he won't let him because of his lingering war trauma: when he is stressed he quacks like a duck. Determined to go to work as a milkman he goes to work for his father's arch-rival. The movie then follows his crazy adventures as a milkman.  I have been wanting to see this movie for awhile now - maybe a year now? So I was thrilled to find a channel with Donald O'Connor movies on YouTube earlier this month. The first movie on my list to watch was, The Milkman. It is awesome, hilarious, and just plain wonderful. What can be better than a movie with both Donald O'Connor & Jimmy Durante? Maybe another movie with my favorite actor/singer & Jimmy Durante? *grin*

Yes Sir That's My Baby {1949} Starring: Donald O'Connor, Charles Coburn, Gloria DeHaven - A group of ex-GIs are attending college and they want to play football. But their wives say they need to grow-up and help them with the baby when they attend their classes. Eventually the husbands win over their wives to letting them play football. This movie was very cute! It was fun seeing Donald O'Connor as a young father too. This could be considered a light heart romantic comedy - you will see why when you watch it. As I don't want to giveaway too many details of the movie. But I dearly loved this movie. But then again, how can you not like Donald O'Connor?

That Funny Feeling {1965} Starring: Sandra Dee, Bobby Darin, and Donald O'Connor - Joan Howell {Sandra Dee}, a maid-for-hire and actress on the side, keeps bumping into Tom Milford {Bobby Darin}, a wealthy New York businessman, while going around town. They finally decide to go out on a date after they keep bumping into each other. After the date Tom wants to escort Joan back to her place. But Joan is embarrassed of tiny apartment that she shares, so she takes him to one of the apartments she cleans saying it is her place - the catch is, she doesn't know that the owner of that apartment is in fact her date, Tom. He plays along with the charade, while not knowing who Joan really is. The movie then follows all the crazy process of them finding out who each other really is. This is one of those light hearted 1960s romantic comedy movies that are just adorable! Every line that Doanld O'Connor said throughout the movie had me & Gaby rolling with laughter. Sandra Dee has an adorable wardrobe - and she is just too cute herself! {I saw many outfits I wanted to copy!} And be warned, the main song: That Funny Feeling will get stuck in your head.