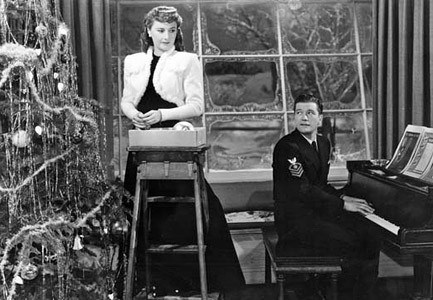 Come November & December I like to pull out and watch my favorite Christmas movies, or try out "new" old Christmas movies. After seeing Amanda's Christmas Film Classic post over at AmandaBeth Online, I decided to do my own list for y'all.

A magazine food writer {Barbara Stanwyck} has lied about being the perfect housewife must try to cover her deception when her boss and a returning war hero {Dennis Morgan} invite themselves to her farm in Connecticut for a traditional family Christmas.  Very sweet & fun! Plus, Barbara Stanwyck wears some really cute clothes! Always a huge plus. *grin*

A homeless New Yorker moves into a New Yorker Tycoon mansion when the owner goes south for the winter {the owner doesn't know} and along the way he gathers friends to live in the house along with him. Before he knows it, he is living with the actual home owners {who play along with the idea for their daughter}. The movie stars: Don DeFore & Gale Storm. This is one of my favorite Christmas films and Gale wears some adorable clothes too!

A soldier {Joseph Cotten} suffering from battle fatigue meets a young woman {Ginger Rogers} on Christmas furlough from prison {for accidentally killing a man} and they fall-in-love. One of those tearjerking movies that is so perfectly lovely in the end. p.s. It also stars Shirley Temple.

All I will say is that this movie is very sad and is hard for me to describe {it's been awhile since I saw it}. But I do love it. It stars: Deanna Durbin & Gene Kelly in roles opposite from their norm.

A bishop {David Niven} trying to get a new cathedral built prays for guidance. An angel {Cary Grant} arrives, but his guidance isn't about fundraising. Instead he is there to help the bishop make his marriage with his wife {Loretta Young} better. One darling movie! Plus you get to see Cary Grant ice skate.

An angel {Henry Travers} helps a compassionate but despairingly frustrated businessman {Jimmy Stewart} by showing what life would have been like if he never existed. This is a family favorite in our house. One of my favorite scenes is when George {Stewart} sees Mary {Donna Reed} all grown up at the High School graduation dance and asks her to dance {that whole dance scene just makes me want to dance}. Does anyone know where I can find a 1940s swing version of The Charleston, not a 20s version? As I adore the version in the movie!


There are more Christmas movies I enjoy watching, but it would take me too much time to list them all for you.


What are your favorite Christmas movies?