Today is Thursday! Meaning it's time for I ♥ Thursday. Where I show y'all what I'm loving this week.

Command Performance Radio Show {which you can download on internet archive} - A radio show which aired originally between 1942 - 1949. The program was broadcast on the Armed Forces Radio Network to the troops overseas {only the the troops could listen to this radio show!}. I just listened to my first show today and fell head-over-in-heels in love with the program! It is hilarious! My favorite episode so far stars Frank Sinatra, Elizabeth Taylor, Margaret O'Brien, and Bing Crosby's kids.  Oh. My. Y'all must listen to this one first. I'm thinking it aired in 1944, based on the movies and songs it mentions. So everyone is really young. It's great! 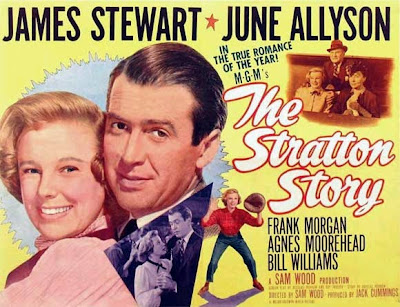 The Stratton Story {1949} - Starring: James Stewart, June Allyson, Frank Morgan.... - I taped this movie on a whim the other week off of TCM. I thought it looked good. It's a baseball movie (always good). Jimmy Stewart is in it (huge points). And boy was it a good movie. (If you are a baseball fan, you will like to know that Bill Dicky also plays himself, just like he did in The Pride of the Yankees.) It is a very sweet, encouraging {Jimmy Stewart's character loses his leg} movie. Definitely one of my favorite sport movies. I highly recommend it! *smiles*

What have y'all been loving this week?