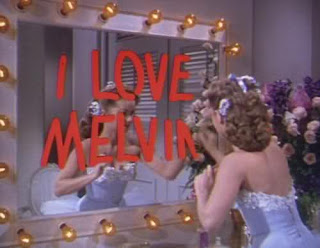 I watched a simply charming movie last night. Its name, I Love Melvin. Starring: Donald O'Connor and Debbie Reynolds. Both who are favorites of mine. *smiles* It was delightful to see them paired together after appearing together in Singing in the Rain {1952}. I have to say, I think O'Connor & Reynolds are just adorable together {I kinda wish Reynolds was paired with O'Connor in SItR instead of Gene Kelly}. 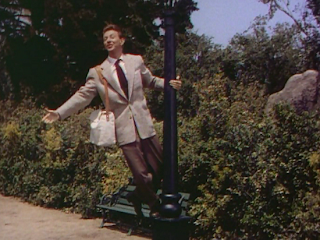 The movie is about a girl who is trying to make it in the acting world. Who has a protective family, and a rich boyfriend who wants to marry her (but she doesn't truly love him. Her father loves him as he has security {money}). One day in a park she bumps into a boy who is an inspiring photographer for LOOK magazine. Who after they meet he promises to have be on the cover. It is just a whirlwind of events after that. I don't want to give away too much of the story to y'all! ;-)

Debbie has one adorable wardrobe in this film. In fact, I wished everything she wore could just jump into my closet - hair included. *laughs* But I mean it. Everything is so cute! There wasn't one thing I didn't like that she wore. That is kinda amazing.


One of my very favorite outfits of hers was in the dance scene, Who Taught You to Dance?. Too cute! There was one interesting thing about her skirt. Her petticoat was attached to the skirt. I'm guessing this is not the norm, and they only did it for her to get dressed quicker in the scene.


Here are some of my favorite scenes from the film and we can't forget the movie trailer. ;-)


This is my favorite dance number and song for this week. I've only listened to the song over 400 times this week.


This is my second favorite number and song for this week.


You can buy both the movie


Have you seen this movie? And what is your favorite Donald O'Connor and/or Debbie Reynolds film?