On our first day in London which was Friday, September 11th, we all took a private tour of London on a coach in the morning. We saw so many sites that morning. St. Paul's, Tower of London, Victoria & Albert Museum, Harrods, Natural History Museum, Wellington Arch, Buckingham Palace, Trafargar Square, 10 Downing Street, St. Martin-in-the-Fields, George Washington Statue, and so much more!!!!

Do you want to see pictures? *huge grin* Of course you do! Well then, on to the pictures! 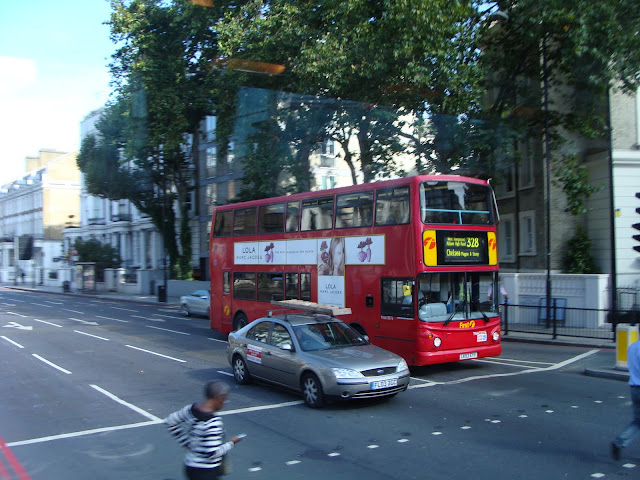 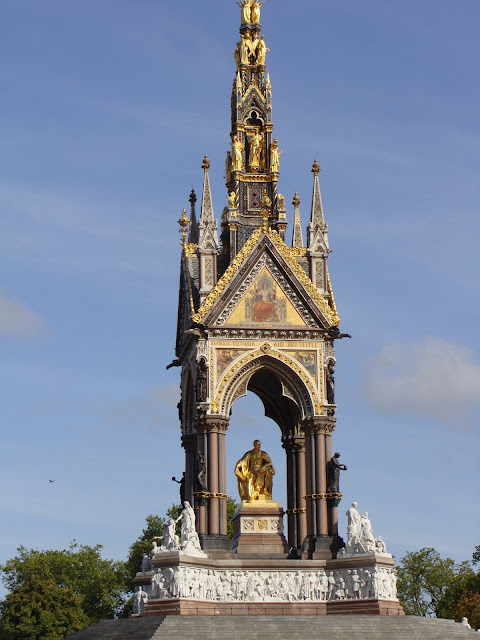 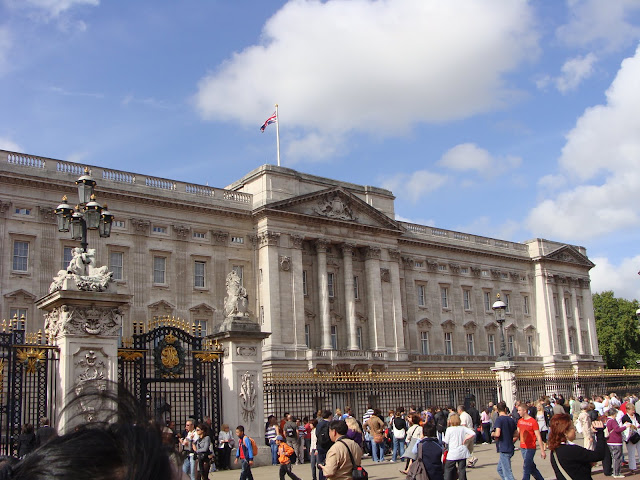 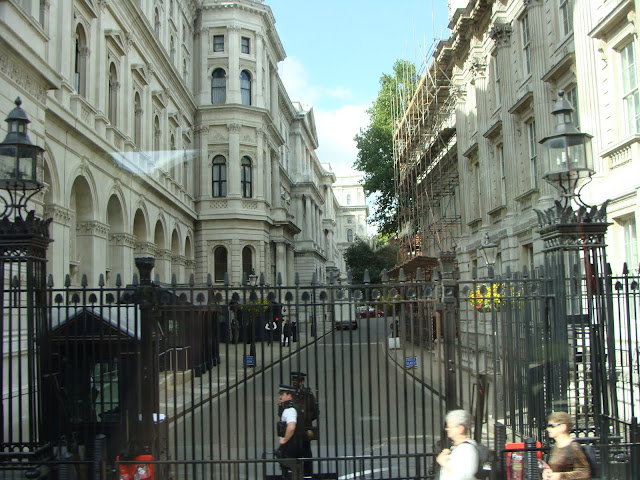 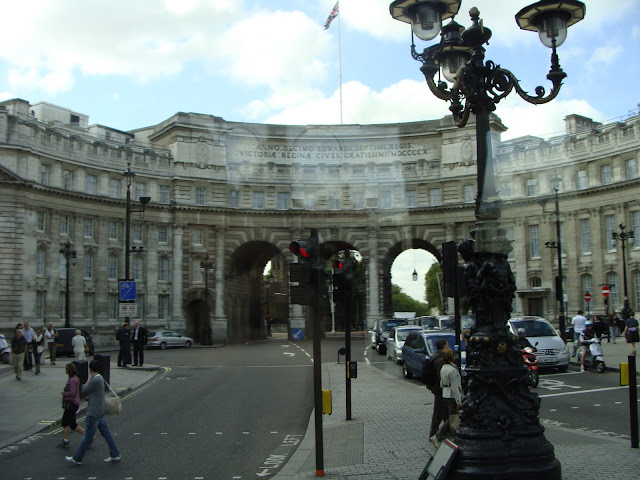 I forgot the name of this, but I do believe it was in the St. James's area. 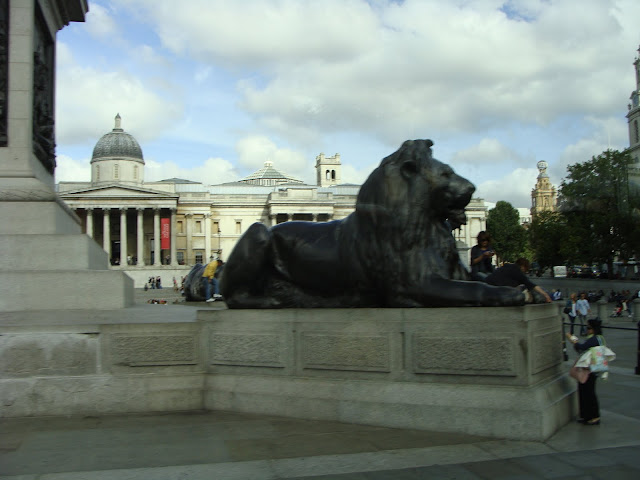 One of the four lions guarding the Nelson Column in Trafalgar Square. 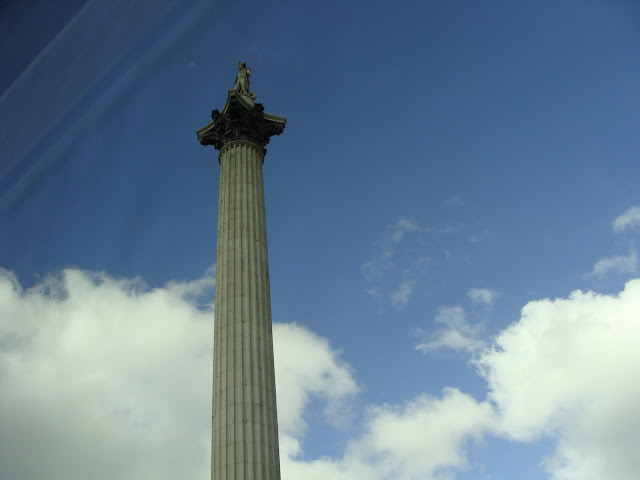 The top part of the Lord Nelson Column 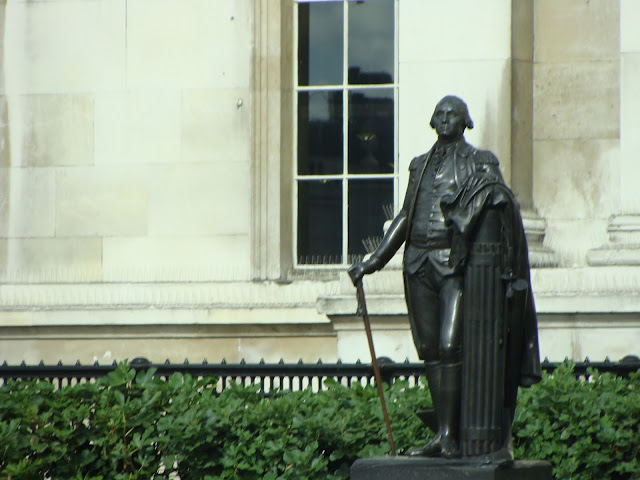 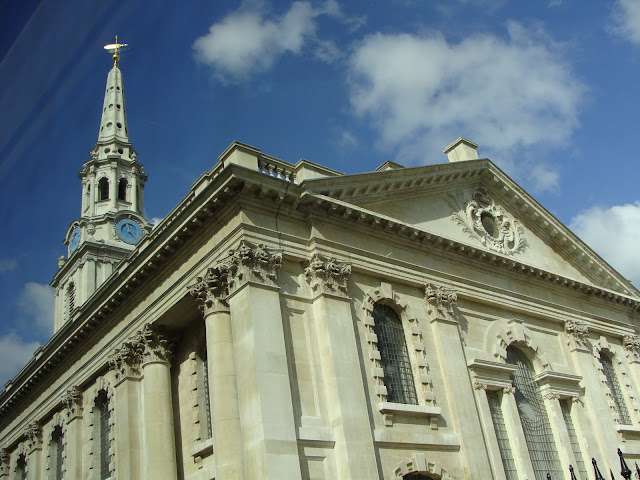 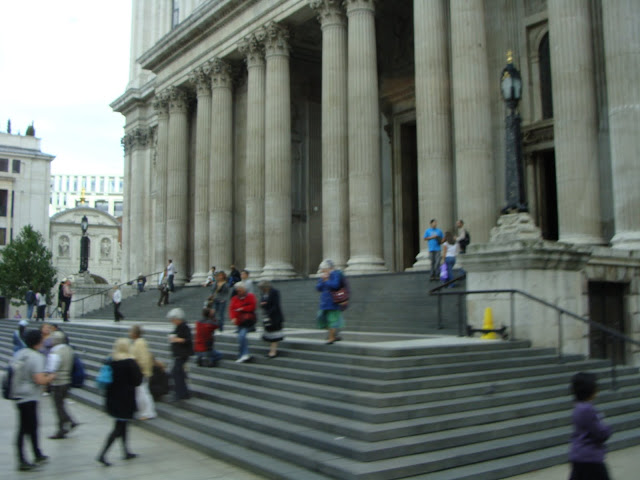 The steps of St. Paul's were the scene Feed the Birds in Mary Poppins was filmed. Fun! 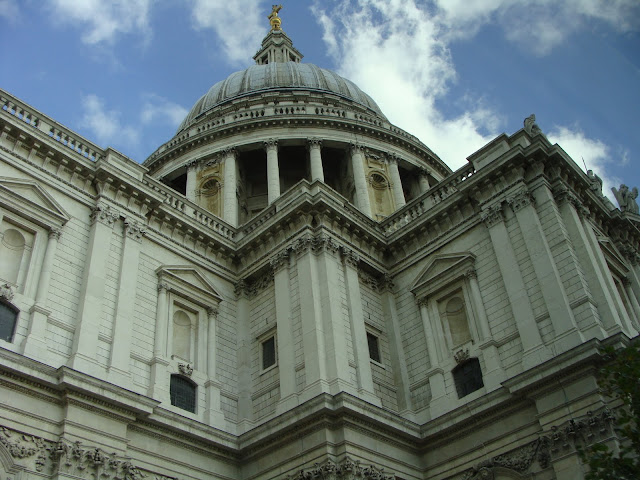 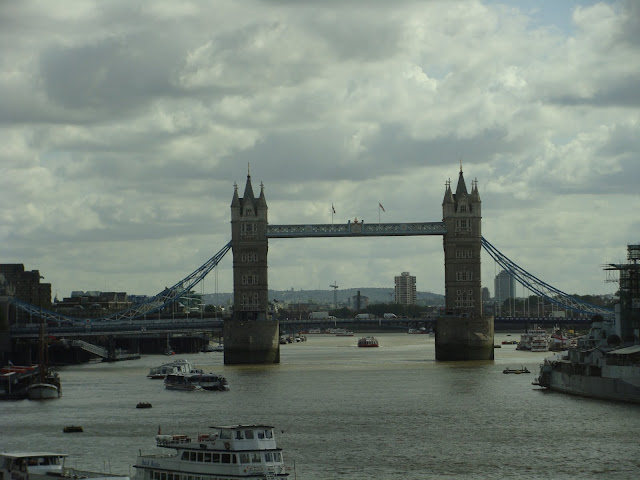 OK, Americans what bridge is this?
I know you are thinking London Bridge, but guess what?
It is called, Tower Bridge. 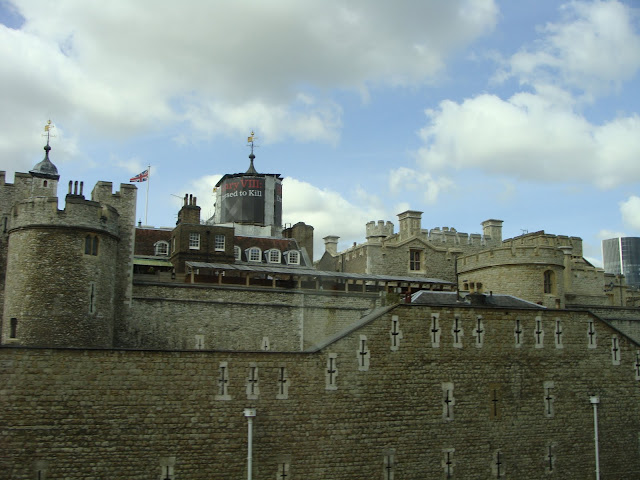 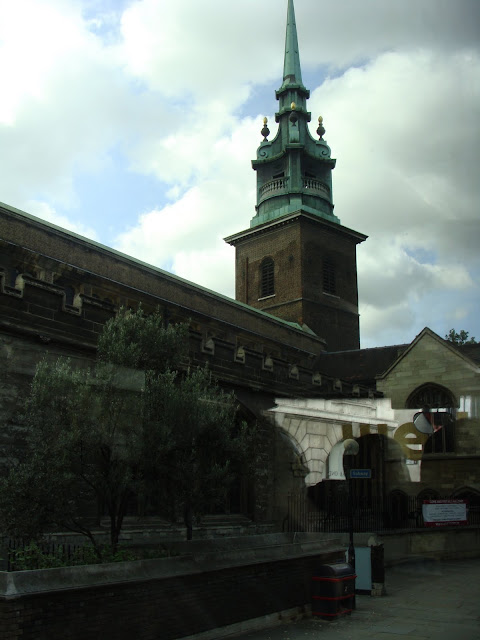 Some pretty church in London 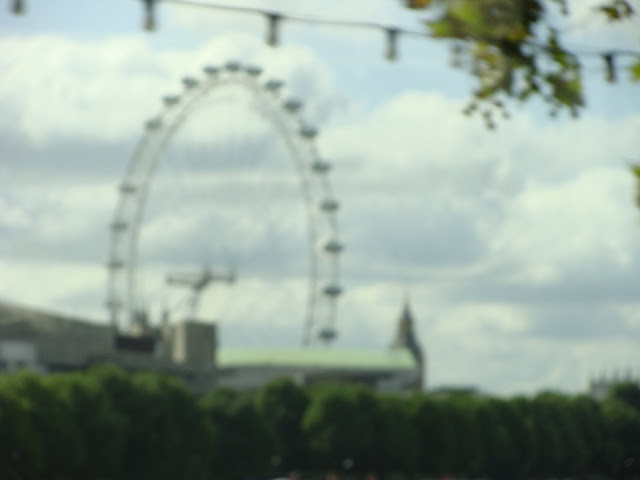 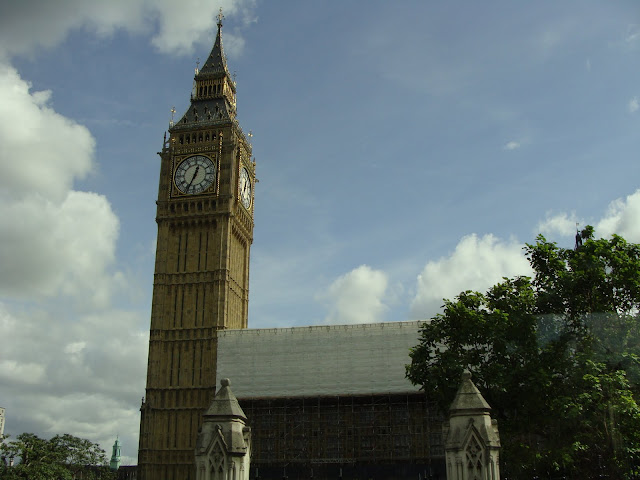 What is the name of this Americans, the true name?
It is not Big Ben but, Bell Tower. The bell inside the tower is called Big Ben, so everyone calls it Big Ben. 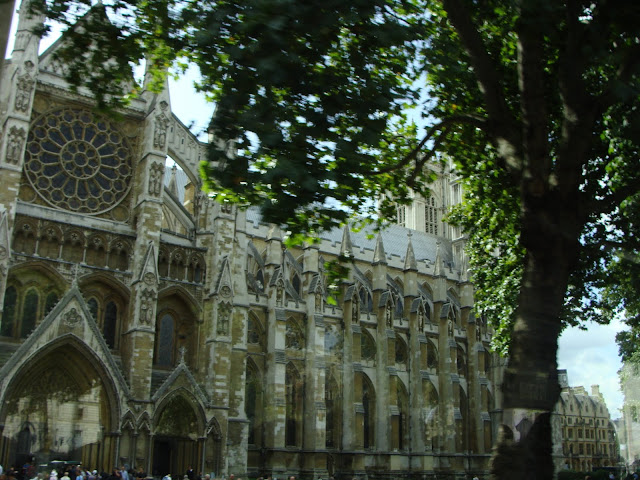 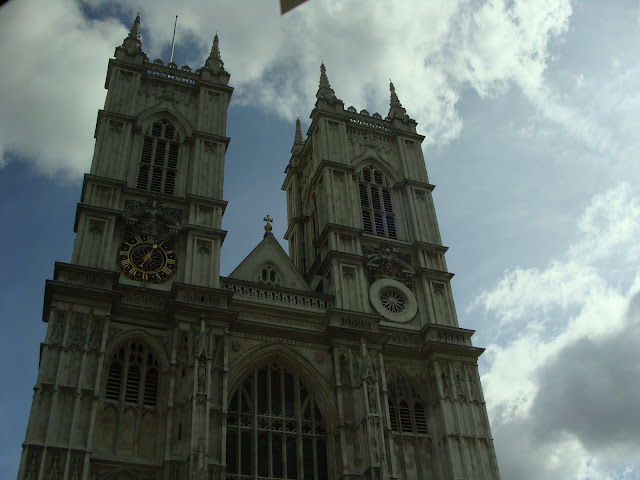 Westminster Abby again from another view. 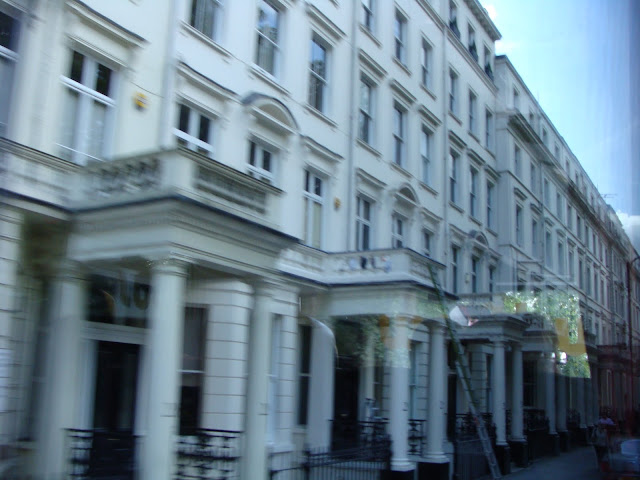 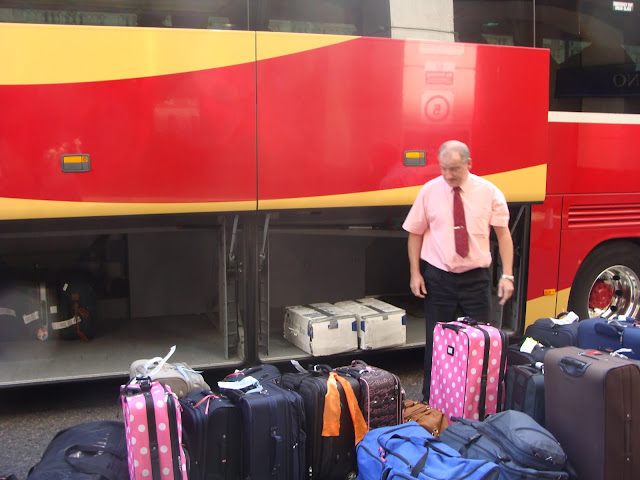 This picture shows almost all of our bags, not mine and my moms but, the whole tour group's.

We were able to see so much in the morning, things we really wanted to see that we don't have to visit them latter this week. Hurray! Another good thing was that we were able to get out at the Albert Memorial, Buckingham Palace, and St. Pauls to walk around a bit and get some great pictures.

I'll try to post more pictures Tuesday, as we have Victoria & Albert, Suzi's House, and As You Like It play at Shakespeare Globe on Monday.

I'll give you all a taste of we have done in the past few days. I will try to post pictures later. I promise! On Friday, the day we arrived, we visited the Tower of London in the afternoon. Saturday, September 12th we toured Shakespeare's Globe, visited Portobello Road Market (Oh, I have a funny story to tell about that), and Marylebone. Sunday, September 13th we attended Metropolitan Tabernacle, Charles Spurgeon's church. After church my mom and walked to the Imperial War Museum and the Westminster area. Afterwards we took the tube back to the hotel to rest our feet, then we back out on the road. We walked to Kensington High Street to visit a Laura Ashley store to browse around, as they left America. :( Then we walked to Kensington Gardens and saw the Peter Pan statue. After that we headed to the hotel and I'll tell the rest latter, as I HAVE to get to bed. It is like 12:48 AM here! :-)

Talk to you all later!